The leaves are falling off of the trees, frost covers the ground each morning, and Halloween is only one day away. What does all of this mean?

Hooray!!! I am one of those strange people that actually prefers fall and winter to spring and summer so bring on the cold weather.  I finally get to exchange my shorts and flip flops for hoodies and Ughs (or cheap, knock-off Ughs in my case). I love taking my kids to Klackle's Apple Orchard every year, which I highly recommend. It is definitely a bigger bang for your buck compared to all of the other local orchards.  Fall also means we get to toast pumpkin seeds, collect brightly-colored leaves, and snuggle in front of a fireplace. Not to mention,  my two favorite holidays are in fall, and as much as I enjoyed Halloween and Thanksgiving as a kid, it cannot compare to sharing these special days with my own children.

Halloween is on a Thursday this year and Portland schools are closed the follow day. The positive about no school on Friday is that you can trick-or-treat, go to parties, and share all of the goodies without worrying about getting kids to bed early. The negative is that your kids will be home all day Friday and, more than likely, super hyper from overdosing on sugar.

If you do find yourself looking for a way to entertain the kiddos this Friday the library is hosting Gameapalooza. Kids of all ages can get with their friends and play everything from Sorry and Apples to Apples to Wii Dance and Mario Kart. They can even bring their own favorite game to share. So if your kids start to whine about being bored on Friday bring them down to the Portland District Library. The gaming will commence at 11:30am.

Posted by Anonymous at 7:38 AM No comments:

I wrote a post earlier this month about some of the adult horror books that I have enjoyed recently. Actually, I had only just started Dr. Sleep, Stephen King's sequel to The Shining. Just to fill you in, it was terrifying, exciting, and funny with characters so clearly written they could walk off the page. My only complaint is that it took King 36 years to publish Dr. Sleep. 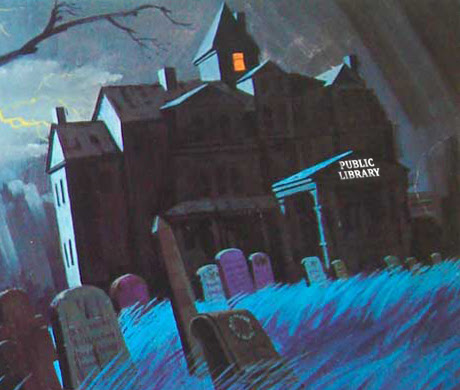 Back to what I actually intended to write about; some of my favorite Halloween and not-too-scary stories for kids. 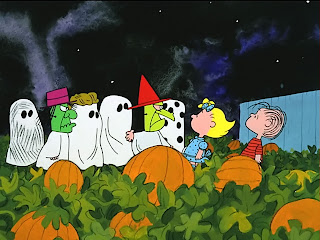 Let's start with a classic. Most people are either fans of the hapless Charlie Brown or they just find him depressing. I happen to adore Peanuts and so It's the Great Pumpkin, Charlie Brown is one of my favorite Halloween stories. I know that it was a television special before it was a book, but who cares. Nothing is funnier than Charlie Brown trick-or-treating in a sheet with at least twenty extraneous eye holes and dolefully stating after each house "I got a rock". Then you have poor Linus getting berated by Sally when she realizes that she missed trick-or-treating for a Great Pumpkin that never showed.

One of the most hilarious Halloween picture books is written by Dav Pilkey, who also wrote the Captain Underpants series. Don't worry their is no toilet humor in this one; it is a sweet story that actually delivers a lesson on bullying.
The Hallo-wiener is the story of Oscar, a cute little dachshund whose doting mother makes him a Halloween costume. The only problem, it's a hot dog costume and what looks more ridiculous than a wiener dog wearing a wiener costume? Oscar loves his mother too much to risk hurting her feelings, though, so he wears the hotdog and is immediately teased by every other dog. 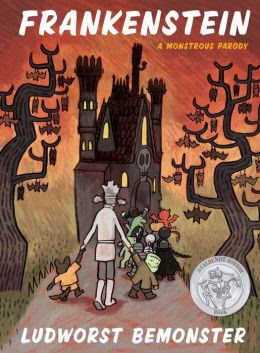 Does the cover of this book remind you of another famous children's book? I have never been a huge fan of Madeline by Ludwig Bemelman but this parody written by Rick Walton and illustrated by Nathan Hale is monstrously funny. Little Frankenstein may be the scariest monster in Miss Devel's castle, but  all of her charges are incredibly cute in a creepy/adorable way. 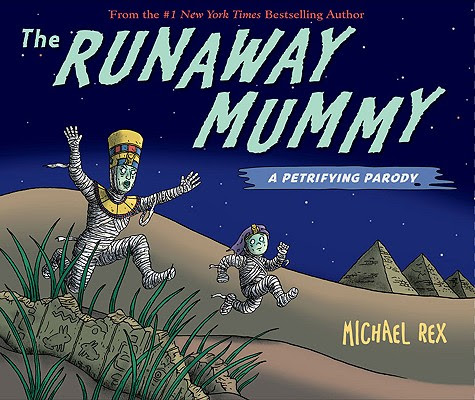 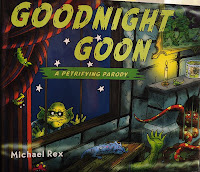 If you like parodies of famous children's books and who doesn't I also recommend Goodnight Goon and Runaway Mummy by Michael Rex. Millions of children have grown up with Margaret Wise Brown's sweet and lyrical children's books and it is this familiarity that make their spooky cousins so much fun to read. 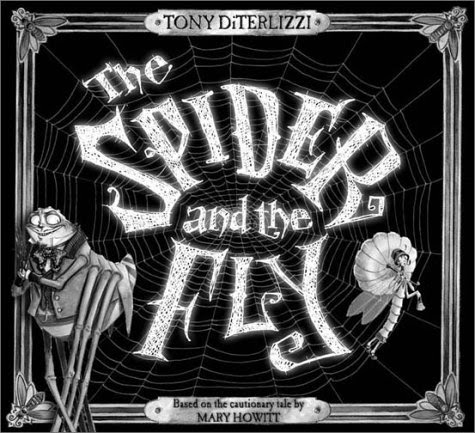 "Will you walk into my parlor?" said the Spider to the Fly. This poem may have been published in 1859, but readers of all ages will still find it relevant and deliciously scary. In 2003 Tony DiTerlizzi (The Spiderwick Chronicles) republished the classic poem with spectacular black and white illustrations that earned him a Caldecott Honor.  The book reads like a silent film in the twenties. I especially love how debonair, yet sinister the fly looks. Younger kids probably won't understand the old-fashioned language, but older kids (and adults) are sure to giggle and shudder when the fly falls victim to the spider. Hey you could even use this book to educate your kids about stranger danger: "And now dear little children, who may this story read, to idle silly flattering word I pray you ne'er heed;".

For kids wanting spooky chapter books, but not anything that will give them
nightmares The American and Michigan Chillers are a great series to start with. The covers are probably the scariest part of these books that  read more like episodes of Scooby Doo.The author of the chiller books, Johnathan Rand, is from Michigan and even has his own store in Indian River that sells only his books. The best part about Chillermania is that Rand is frequently in the store and will talk with the kids and sign their books.

Also on the fun, but not really scary list are James Howe's Chester and Harold books. If you were a kid in the 80s you probably read Bunnicula and Howliday Inn as well as the subsequent adventures of Harold, the cupcake loving dog, and Chester, the cat who reads too many horror novels. No, a vampire bunny that mysteriously disappears from his cage in the middle of the night to suck the juice from vegetables is not really terrifying, but these books have always been favorites. 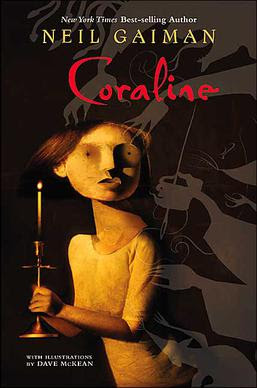 Okay, on to some books that are actually quite frightening. I love Neil Gaiman, who is an amazing writer as well as a huge proponent of libraries. His books range from spooky ghost stories to comical adventure. One of his most hair-raising books, though, has to be Coraline. When Coraline and her family move, her new home has a locked door that would appear to have nothing but a brick wall on the other side. After she unlocks the door, though, she finds  a copy of her apartment on the other side along with replicates of her parents. Everything seems to be so much nicer on this side, or is it? I think that it is the fact that everyone on the other side has button eyes that makes this book so disturbing, at least for me.I must confess that I have always thought that dolls are creepy looking and when the other mother is trying to take Coraline's eyes and replace them with buttons it is just horrifying.

A newer series that is full of creepy crawlies and monsters is Tales from Lovecraft Middle School by Charles Gilman. Strange things are happening at Lovecraft Middle School; students are disappearing, the library is a labyrinth, and the science teacher turns into a monster who eats rats. All of the covers of these books have super cool holographic covers that alternate between a normal view and a gruesome view. If you have a child that loves the macabre they will not be able to resist these.

I feel like I could just keep going, but this post will take you longer to read than It (by far the scariest novel ever written. I get shivers just thinking about Pennywise the Clown). Also, I have been trying hard not to just say that every book is "scary", but if I keep going I am going to have to dig through my college books for my thesaurus because I cannot think of any more words that mean spooky, scary, terrifying, etc.   Have a spookalicious Halloween and read some of these creeptastic books (there I will just make up my own synonyms for scary). 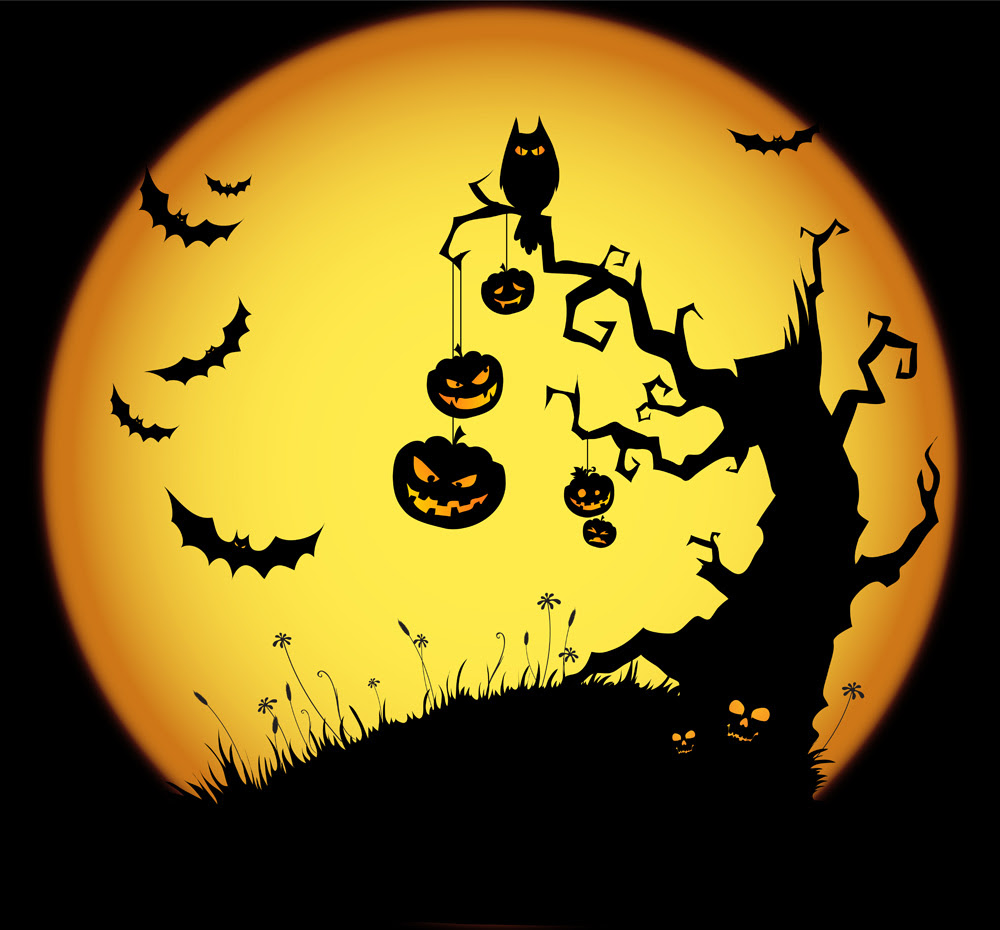 Teens will come in and do a gruesome makeover on a friend. Then we will watch a scary movie. So come to the Portland Library Oct. 19th at 12p.
Posted by Anonymous at 1:04 PM No comments: 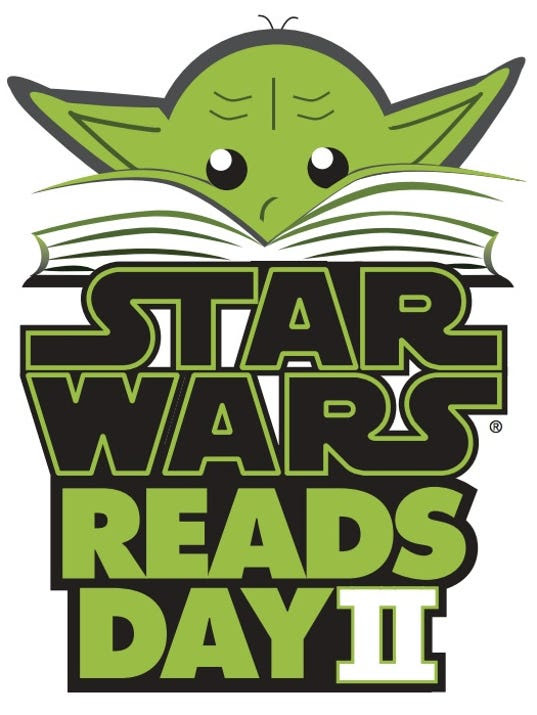 The library celebrated Star Wars Reads Day this past Saturday and the party was awesome! This was the second year for this geektastic, national event and our attendance more than doubled.

I am such a nerd so planning Star Wars crafts, games, decorations, etc. was right up my alley. I didn't get pictures of everything, because people  started to arrive and once the party was going I  was too busy darting from one place to another like a manic squirrel. To be honest, though, whether it is a family vacation, the first day of school, or a party at the library I am the absolute worst person to be in charge of taking pictures. I usually forget to take any pictures and when I do take them they are blurry or I cut off peoples heads or have them horribly off center. The fact that I took this many pictures is a huge achievement for me.

I think that balloon should be a part of every party The kids are mastering the force to keep the balloons in the air. This was also a great diversion for younger kids while I played Star Wars hangman (or don't let Han Solo fall into the Sarlacc's pit) with the older kids.

My daughter, Zoe (AKA Princess Leia), was and continues to be the Star Wars origami master.

"Jabba Hungry" was easily the most popular game and I must admit that I am pretty proud of how he turned out. I drew him and Sierra painted him for me. I brought all of my kids Star Wars beanie babies from home to "feed" Jabba. Throwing R2D2, Jawas, Darth Maul, and others into Jabba's mouth made the game a thousand times more fun than just throwing regular bean bags. With every game, I was able to give away cool prizes since I had received so many freebies from different publishers. The kids loved the pins, posters, bookmarks, etc. and I loved sending everyone home with some great loot.

Ruthie Fedewa was the winner of the costume contest. She made an amazing Aayla Secura and it is really impressive how she created her costume rather than just buying one.

I am pretty sure that everyone had fun and that is what matters most to me. Now I have an entire year to come up with new and more exciting things to do at Star Wars Read Day III!
Posted by Anonymous at 9:12 PM No comments: