Earlier this month I created a "New Year, New Series" display in the children's area of our library. All of the books gathered for the display are the first in a series.This is my attempt to get young readers breaking out of their comfort zones and reading something other than Diary of a Wimpy Kid, Magic Tree House, The Lightning Thief, Harry Potter, etc. Not that there is anything wrong with reading an uber popular series but, hey, other books deserve love too.

For my next few blog posts I thought that I would share a few of my favorite series for different age levels and in a variety of genres. As you have probably surmised this first post is all about juvenile fantasy. I have tried to include some older series and those that may not be as well known. Hopefully you will find something exciting and new to you.

1. The Chronicles of Prydain by Lloyd Alexander 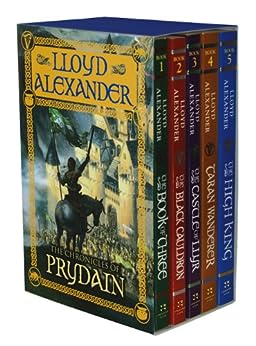 You may recognize this classic, high fantasy series if I tell you that the title of the second book is The Black Cauldron (you know, that Disney movie from 1985).

Do not judge The Chronicles of Prydain by the movie because, of course, the books are far superior. In fact, the second book, The Black Cauldron, earned a Newbery Honor in 1966 and the fifth and final book, The High King, won the Newbery Medal in 1969. The books follow the adventures of Taran, assistant pig-keeper, and his companions as they battle Arawn Death-Lord and his evil minions in the magical land of Prydain. Wow, fantasy books really do sound ridiculous when you try to summarize the plot.  However, The Chronicles of Prydain is captivating and perfect for advanced readers not quite ready to tackle The Lord of the Rings.

I don't think that there are enough adjectives to express how much I love the Ranger's Apprentice. The series was originally twenty short stories that Australian author, John Flanagan, wrote to interest his son who was a reluctant reader.

In the first book, The Ruins of Gorlan, we are introduced to fifteen year old Will, a young orphan who is chosen to be an apprentice to the rangers, a secretive contingent of the military that spy and gather information for the kingdom of Araluen. Under the tutelage of the illustrious ranger, Halt, Will becomes an expert archer and knife thrower who is skilled in stealth, tracking, and camouflage. Fantasy and adventure fans of all ages will devour the Ranger's Apprentice series. Due to the emphasis on the rangers' adeptness in the wilderness I also like to recommend  Flanagan's books to readers (especially boys) that are interested in outdoorsy adventure books like Hatchet by Gary Paulsen. My own son begged for a bow and arrow after reading the Ranger's Apprentice.

In addition to the Ranger's Apprentice books Flanagan has written two spinoff series. The Brotherband Chronicles focuses on the Skandians, a nation of people that bear a striking resemblance to the Vikings and hail from Skandia (Scandinavia?) far to the north of Araluen. Flanagan's latest books are the beginning of a prequel series about Halt's early years in the rangers.

When ten year old Charlie Bone develops unusual powers he is sent to the Bloor Academy, a special school for children with magical talents. I know the plot sounds eerily like another well-known fantasy series, but I promise that even though Nimno's Charlie Bone series will appeal to Harry Potter fans it is completely unique.

In addition to the eight books that make up the initial Charlie Bone series, there is a three volume prequel series, The Chronicles of the Red King.
4. The Thickety by J.A. White

It isn't often that I read a book (especially a children's one) that truly surprises me. I can honestly say that all of the books that currently make up The Thickety series shocked me. And I mean that in an totally awesome, I never saw that coming, double wow, I am still thinking about it way. 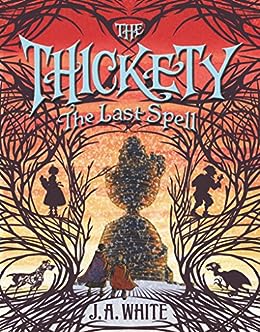 You can watch the trailer for the first Thickety book, A Path Begins, below. I hate giving away too much information about a book when I review it, because I feel like if you want a summary you can read the description on the Barnes and Noble website. Suffice it to say, A Path Begins features a strong, likable  heroine, a menacing forest inhabited by a demonic sorcerer, and a plot twist that will hit you like a punch in the gut. I couldn't imagine that J.A. White would be able to match the suspense and thrills of  A Path Begins in the The Whispering Trees and Well of Witches, but he does just that. I must confess that I was really hoping that The Thickety was going to be a trilogy because I wanted to know the ending, but Well of Witches is another hair-raising cliffhanger that will leave you desperate to read the fourth book. Unfortunately, The Last Spell, which will be the conclusion to The Thickety story will not be published until this coming April!

If you are a hardcore fantasy fan you have probably heard of Earthsea and Ursula K. LeGuin. Each of the five primary books in the series (Tales from Earthsea are short stories) has received multiple awards:
A Wizard of Earthsea- Boston Globe-Horn Book Award, Lewis Carroll Shelf Award
The Tombs of Atuan-Newbery Honor
The Farthest Shore-National Book Award
Tehanu-Nebula Award for Best Novel, Locus Award for Best Fantasy Novel
The Other Wind-World Fantasy Award for Best Novel
I decided to include it because Earthsea is an older series and, therefore, probably not familiar to young readers.

As the name suggests the fictional world created by LeGuin is one of sea and hundreds of islands. Magic is an integral part of life on the majority of the islands and the first book, A Wizard of Earthsea, is a coming of age story about a young wizard name Ged.  Many people consider the first three books of the series to be a trilogy since they were published in 1968, 1971, and 1972. Tehanu and The Other Wind were not published until 1990 and 2001.

I keep trying to think of ways to describe the plot of Earthsea but like many high fantasy series, it is complicated and highly detailed. If I start getting into characters and story lines for each of the books I would be writing for days and you would probably still be confused. I will just close with saying that if you enjoy fantasy books and are looking for a new series you should check out Earthsea. Or if you, like me, read the original Earthsea trilogy when you were younger you should definitely look for Tehanu, Tales from Earthsea, and The Other Wind which are exciting additions to the Earthsea universe.

6. The Underland Chronicles by Suzanne Collins

This may come as a shock, but Suzanne Collins has written something other than the bestselling  Hunger Games trilogy! The Underland Chronicles follows a young boy named Gregor on his adventures throughout a fantastical world located far below New York City. Although geared towards a slightly younger audience, The Underland Chronicles explores many of the same themes as The Hunger Games, such as war, politics, revolution, and subjugation.  The series is exciting and enormously creative but if you are at all squeamish you may want to pass on The Underland Chronicles. The subterranean world created by Collins is teeming with human-sized rats, cockroaches, bats, and mice that are certain to give readers afraid of creepy crawlies more than a few shudders. 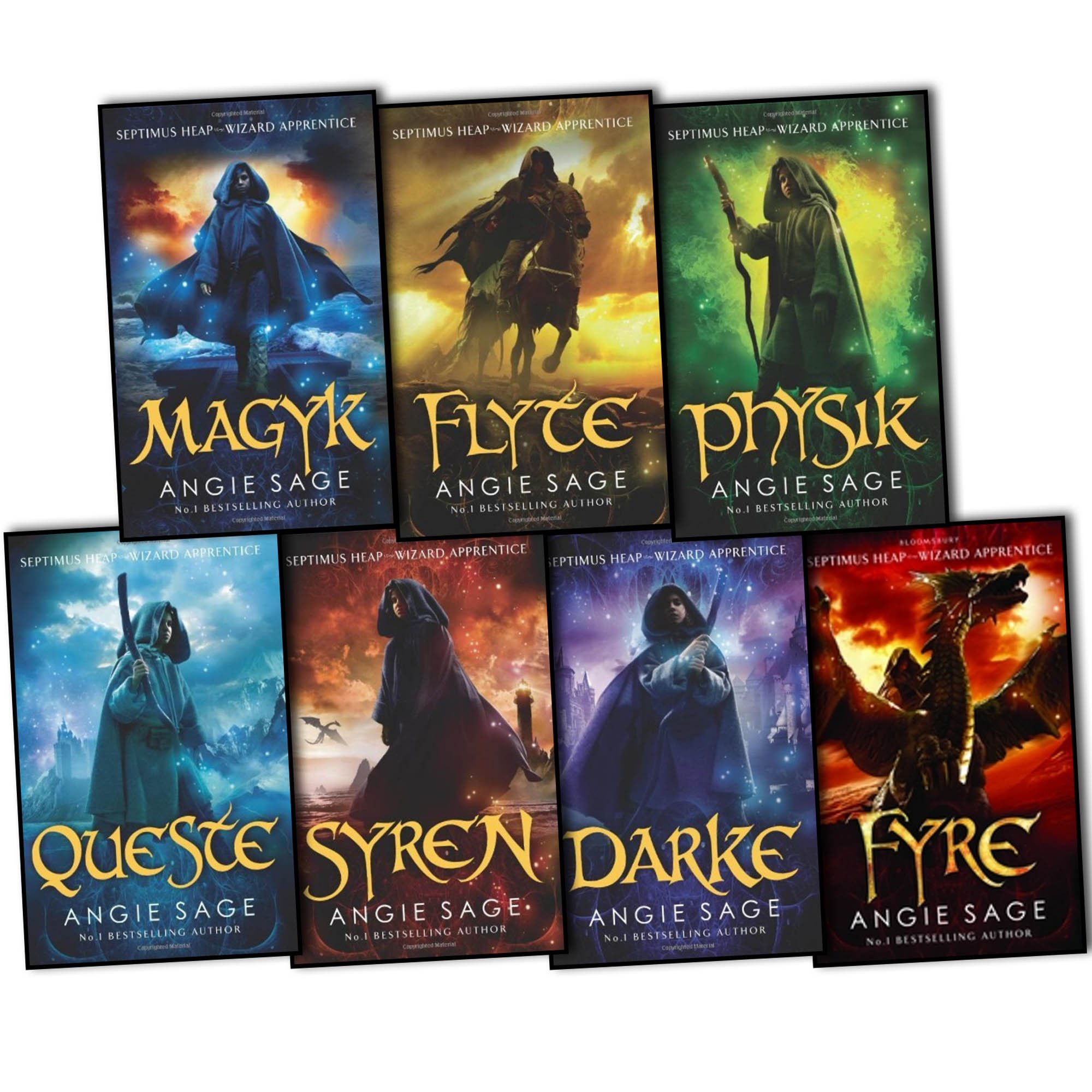 As the seventh son of a seventh son, Septimus Heap is destined to be a powerful wizard. Angie Sage's marvelous fantasy series follows the exploits of young Septimus from the night of his birth when he is pronounced dead and stolen from his family through his training to become an ExtraOrdinary Wizard. The Septimus Heap series is packed with thrilling magic and quirky characters that are sure to please fantasy aficionados. I will warn you, though, that the thickness of these books will intimidate some young readers. Despite their daunting appearance, the Septimus Heap books are fast-paced and fun and I encourage readers to give them a try. If you really do not want to read them, the audiobook versions read by Allan Corduner are excellent. You can listen to a sample here.
Posted by Anonymous at 7:46 PM 1 comment:

We are just one month away from our second year of Portland Creates! It's hard to believe it has been a year already. So much work goes into this large event and we couldn't be happier with all of our talented participants. We've already had several artists coming in to get entry packets. This year is bound to be even bigger and better than last year. I'm excited to say that I've already been in contact with some of the school art teachers and will be dropping off packets at St. Pats and the High School this week. The Portland Federal Credit Union has already graciously donated funds for us to purchase prizes and they are hoping to host some art once again this year. A lot goes on behind the scenes and this event is coming up fast.

In response to some of the feedback we received at the end of Portland Creates! last year we have decided to make some slight changes.

1. The children's age group has been further divided into two age groups 6-9 years old and 10-12 years old. There will be 3 winners selected from each children's group

2. We have added judges! Instead of basing the winners on all popular vote we have decided to also add judges selections. This year each age group will have a Judges 1st and 2nd place and a peoples choice winner. The people's choice winner is selected by open public voting throughout the month of March.

3. Adult Participants will have the option to sell their submitted artwork. Those artists who are interested in selling will have a note next to their submission stating it is for sale. If anyone is interested in purchasing their submission we will provide them with the Artist's contact information.  The Portland District Library will take no part in the selling of any artwork. All sales are purely between the buyer and seller.


To help inspire our local artists for Portland Creates! this year, we have set up  a visiting artist workshop with Betsy ONeill!

The Library is offering this free workshop at 12pm on Saturday, January 21st. Betsy plans to bring some of her original artwork and talk about what inspires her paintings. She will be focusing on how to choose colors and setting up a composition. She will also give hands-on drawing tips and share various techniques.


Be sure to sign up in advance, as space is limited. Registered attendees are asked to bring a sketchbook and pencils.

Betsy is a self-taught artist who has been working with oil and acrylic paints for more than 16 years in Grand Rapids, Michigan. She is currently working on a collection of colorful paintings inspired by Michigan towns and destinations based on fond memories and emotions. Betsy was recently awarded an honorable mention in the Grand Rapids Regional Art Competition. You may have also seen her work in Artprize 2016.

Be sure to share this event with any artsy friends or family members, the more the merrier!

Posted by Anonymous at 7:41 PM No comments: