Once Upon a Time

A few weeks back I published a post titled Fractured Fairy Tales in which I reviewed several books and series that are fresh spins on classic stories and fairy tales. Since I only wrote about chapter books in that post I thought that I would take some time to highlight a few picture books that are unique re-tellings of stories we all grew up with.

The first books that come to mind are Jon Scieszka'a hilarious riffs on fairy tales and fables. Probably the most popular of these is The True Story of the 3 Little Pigs! by A. Wolf As told to Jon Scieszka and illustrated by Lane Smith. This is Alexander T. Wolf's side of the story and it turns out that this whole big and bad thing is a complete misunderstanding. All he wanted was to borrow a cup of sugar from his neighbors so he could bake a cake for his granny. Unfortunately, Mr. Wolf happened to have a terrible cold that day and kept sneezing down the little pigs' houses. It wasn't his fault that two unintelligent little pigs made their house out of straw and sticks. Of course, Mr. Wolf did lose his temper when the third little pig in the brick house insulted his dear old granny, but who could blame him? 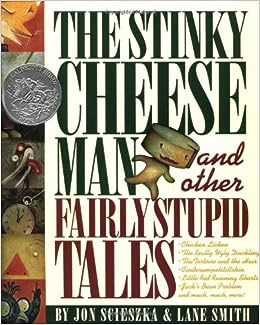 Two other collaborations by Jon Scieszka and Lane Smith are The Stinky Cheese Man and other Fairly Stupid Tales, which was a Caldecott Honor book in 1993, and Squids will be Squids: Fresh Morals, Beastly Tales. 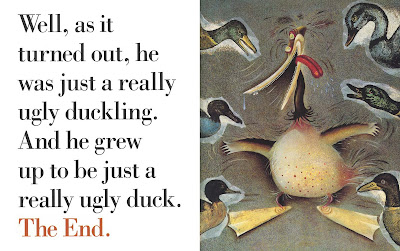 The former of these is a series of ridiculous parodies of fairy tales all narrated by Jack from Jack and the Beanstalk. Instead of Little Red Riding Hood there is Little Red Running Shorts, The Gingerbread Man is replaced by The Stinky Cheese Man, and we have The Really Ugly Duckling who does not grow up to a be a beautiful Swan. 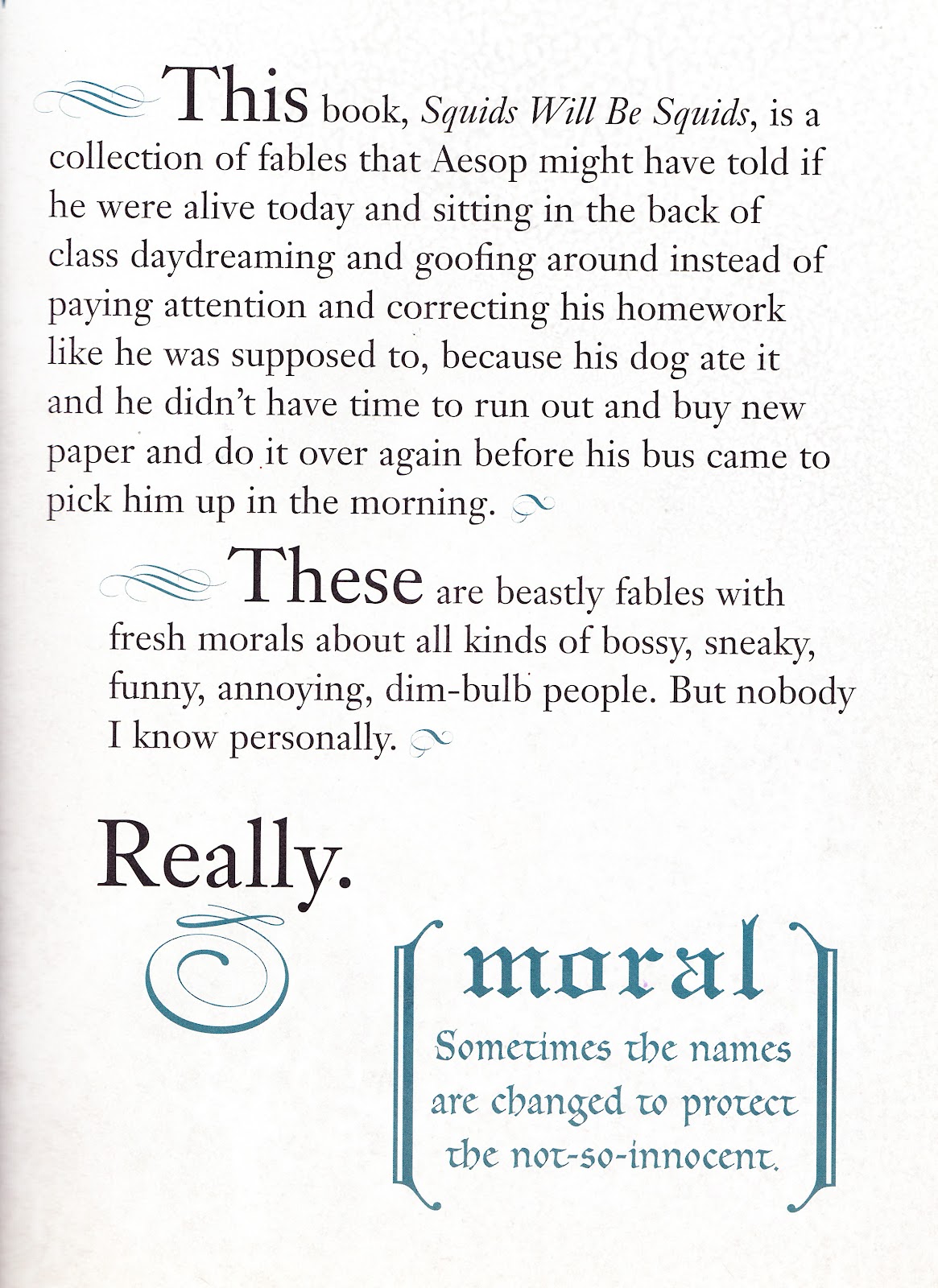 In Squids will be Squids Scieszka and Smith take on Aesop's fables and the results are hysterical. If you are an adult that is easily offended by juvenile humor you might want to leave this book on the shelf. Kids will crack up, though, at morals like:  He who smelt it, dealt it.

Scieszka also wrote The Frog Prince Continued which features stunning yet slightly dark and sinister paintings by Steve Johnson. After the princess kissed the frog and turned him into a handsome prince they lived happily ever after. At least that is the way the story goes, but according to this sequel the couple haven't quite settled down to marital bliss. The princess is constantly irritated that the prince continues to behave like a frog and the prince decides that his life was better before he became human. Now all he has to do is find a witch that will turn him back into a frog. 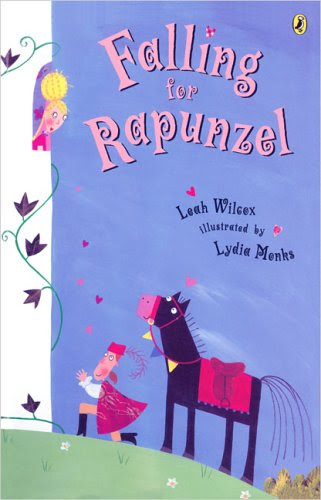 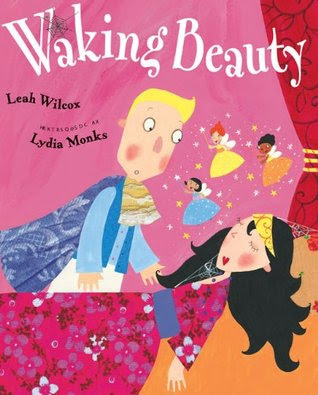 I am not one for perfect, pretty princess stories, which is probably why I adore Falling for Rapunzel and Waking Beauty by Leah Wilcox. The poor tower-bound princess in Falling for Rapunzel cannot understand what the prince is asking and throws everything but her hair out the window. Rather than silky tresses Rapunzel tosses out some silky dresses. Asking for curly locks gets the prince covered in dirty socks and, of course, hair is misinterpreted as underwear.

In Waking Beauty the three fairies try to tell Prince Charming how to awaken the sleeping princess, but he keeps interrupting with his own ideas. When he finally learns that he has to kiss Sleeping Beauty, the prince is not too sure. After all, hasn't he heard that girls have germs?

Adult, child, boy, girl. Every reader will be laughing out loud at Wilcox's farcical versions of these classic princess stories. 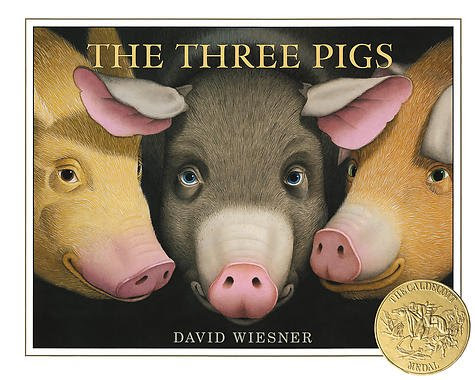 Okay, back to the beginning with two more unique versions of The Three Little Pigs. The first of these, The Three Pigs by the incomparable David Wiesner,  was awarded the Caldecott Medal in 2002. The story may start off  familiarly with three little pigs gathering straw, sticks, and bricks to build houses. Wiesner's version veers from the classic Grimm fairy tale, though, when the big, bad wolf huffs and puffs the first little pig right off the page of the book. Soon all three of the pigs have escaped the pages of their book and set out to explore other stories.

If you have never read a David Wiesner picture book go to the library and check one out today. The three-time Caldecott Medal winner creates stories that are stunning, whimsical, and completely original. 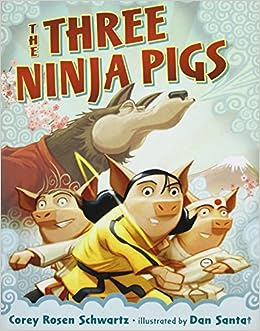 The Three Ninja Pigs by Corey Rosen Schwartz and illustrated by Dan Santat is wonderfully silly and fun to read. In order to combat the big bad wolf three porcine siblings sign up for martial arts lessons. As in the original fairy tale, two of the pigs are lazy and want to play, whereas the third little pig (the sister because girls are just smarter) works hard.  Well, big surprise as to who has the ninja skills to defeat the wolf when he shows up in town. Afterwards, the brothers decide to follow their sister's example and put forth the effort to earn their black belts. 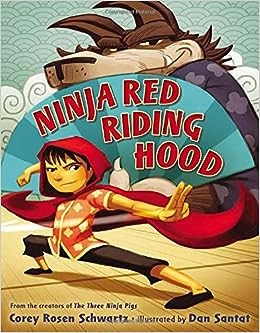 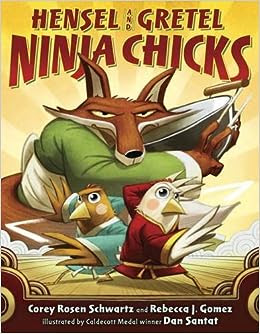 Schwartz and Santat collaborated again on Ninja Red Riding Hood, which is a companion to The Three Ninja Pigs. With the three ninja pigs around the big bad wolf can no longer huff and puff his way to an easy meal. Hunger sends the wolf to a dojo to master the martial arts.  Who better to test out his new karate skills on then a little girl and her granny? Well, unfortunately for the wolf Red Riding Hood has some butt-kicking ability of her own.

Fans of The Three Ninja Pigs and Ninja Red Riding Hood will be thrilled to hear that a third book, Hensel and Gretel: Ninja Chicks, comes out later this month.
Posted by Anonymous at 9:43 PM No comments:

The Return of Hercule Poirot 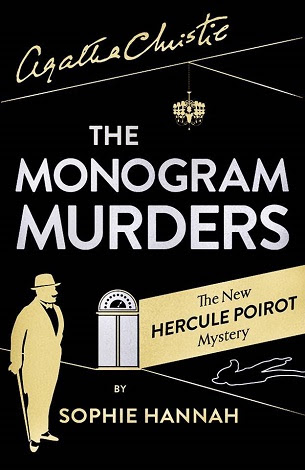 So, The Monogram Murders: The New Hercule Poirot Mystery by Sophie Hannah had been sitting on my Goodreads "Want to Read" shelf since it was first published in 2014.  Why did it take me over two years to actually read it? Honestly, if there had been a Goodreads shelf labeled "Want to read but hesitant because it may completely suck" I would have put The Monogram Murders there. As a fan of Agatha Christie a part of me was thrilled to hear that her famed Belgian detective was going to be featured in a brand new mystery. The fact that Hannah's book had the official blessing of the Christie estate gave me hope that The Monogram Murders would transport me to Poirot nirvana.  Alas, I should have remembered how disappointed I was after reading The House of Silk by Anthony Horowitz which was the first new Sherlock Holmes novel to be sanctioned by the Arthur Conan Doyle Estate (you can read my post, The Game is Afoot, here).

Let me back up a minute and say that The Monogram Murders is not a horrible book and Sophie Hannah is, in her own right, an exceptional mystery author. However, when I read this book I wanted it to be another Murder on the Orient Express, Evil Under the Sun, or Death on the Nile and it wasn't because, let's be honest, there is only one Dame Agatha Christie.

The story starts out promising enough. While dining in Pleasant's Coffee House, Hercule Poirot encounters a frantic woman convinced that she is about to be murdered. The woman insists that death is nothing less than she deserves and before Poirot can unearth the details the woman runs from the restaurant. Later on at his boarding house Poirot learns from a fellow resident, who happens to be a detective with Scotland Yard, that three murdered bodies were discovered at the elegant Bloxam Hotel. Each body had a monogrammed cuff link in its mouth and an ominous note was left at the front desk stating "May they never rest in peace."  Poirot instantly deduces that there is a link between the three murders at the Bloxam and the mysterious woman from Pleasant's Coffee House and he is determined to help Detective Catchpool solve the three murders before another occurs (after all, there must be a fourth murder since cuff links come in pairs).

Most of the problems that I have with The Monogram Murders stem from how vastly different Hannah's writing style is from Christie's. Agatha Christie is renowned for composing mysteries that are incredibly complex and wickedly clever. At the same time, Christie's writing is succinct and precise. There is never a word in an Agatha Christie book that does not need to be there. In contrast, Hannah's writing is much wordier and The Monogram Murders contains backstory, flashbacks, and excessive details that are jarringly UN-Christie like.

The disparity between Hannah and Christie is extremely evident when it comes to the narrator of The Monogram Murders, Detective Edward Catchpool. Now, it is nothing new for Poirot to have a sidekick, so to speak, that is not his intellectual equal. Just think of Hastings or Inspector Japp. What flummoxed me, though, was how Catchpool was so overwhelmed by the appearance of the bodies at the Bloxam that he abandoned the crime scene to return home for a bit of a lie down. Even Poirot was confused: "This evening? And yet you are here. Why are you not at the hotel? The killer, he is apprehended already?" What was Catchpool's response? "Don't worry, there are plenty of police crawling about the place...Tomorrow  morning is soon enough for me to go back...I Had to clear my head."  HUH! Wait a minute here, I thought Catchpool was an experienced detective with Scotland Yard? Yet, Hannah has him practically sprint from a crime scene because three bodies with no outward signs of physical injury freaked him out. Hannah elucidates throughout the book that Catchpool's discomfort with this particular crime scene stems from a childhood trauma, but this backstory was just odd and out of place in an Agatha Christie mystery.

Ok, now I may just be being picky, but it annoyed me how often Hannah had Poirot talking about the "little grey cells". You are probably thinking: Why? Poirot is known for mentioning his little grey cells. Well, yes he is, but not every time he opens his mouth. Hannah references the little grey cells so frequently that it becomes more of an affectation. I began to feel like Hannah was trying to hammer it into my head that I really was reading about Hercule Poirot.

The one good thing about The Monogram Murders was that I did not unravel the mystery before Poirot's big reveal. On the other hand, the mystery was so convoluted that I felt almost dizzy at the end and not in a good way.  The motives and actions of everyone involved were far-fetched and unrealistic. Part of the magic of an Agatha Christie mystery is that after the culprit is denounced all the details snap perfectly into place and you are left wondering: "How did I not see that?" The ending of The Monogram Murders was an improbable, loopy mess that was a bit difficult to swallow.

I know I just ripped The Monogram Murders apart, but let me reiterate that it was far from being the worst book that I have ever read. My mistake was opening it up and wanting it be an Agatha Christie novel and that was never going to happen.  As tempting as it is to have our favorite fictional characters resurrected in new books, it may be better just to go back and savor the originals.
Posted by Anonymous at 6:47 PM No comments: