A couple of days ago BuzzFeed (an online magazine) posted a photo gallery of The 30 Best Places to Be if You Love Books. If you are a book lover you will be astounded by some of these pictures.

This is my personal favorite!

And this brilliant invention would make it even better:

Considering the fact that I am a librarian, I should probably not confess to reading in the bathtub. What can I say, I have three kids and sometimes the tub is the only place that I get to be alone. So far I have only had to pay for one book that fell in!


All of us have our favorite bookstores, libraries, and book nooks (for me it has to be cozy and a tad eccentric). Here are some amazing (and more accessible) places for book lovers that were left off the list:

1. Dawn Treader Used Book Store-First of all, how can you not love a store that is named after one of The Chronicles of Narnia. As a student in Ann Arbor I would walk here and spend hours perusing their eclectic shelves.

3. Coldwater Branch Library-This is one of the oldest libraries operating in its original building in Michigan. It is also a registered State historic site and it has a cupola (which is just cool).

4. Portland District Library-Of course I had to include a picture of my own library and nothing is better than a window seat for reading. The picture is of my daughter, Zoe, reading The Princess Bride for the third time.

5. The Home Book Nook-All book lovers need a cozy, quiet place for reading that is theirs alone. Some of these may be a bit more elaborate than others, but they all look pretty good to me.

Posted by Anonymous at 10:22 PM No comments:

I don't know about anyone else, but I will go through a reading "slump" where I'm fine with the books I'm reading, but nothing really excites me or reminds me of why I love to read.  I'd been going through one of these slumps when I found Pure, by Julianna Baggot, which kind of rocked my world.  Seriously . . . this was one of the best books I've read in years.  For me, it was the perfect storm of books.  It had a post-apocalyptic setting, which I always love.  It had THE BEST characters, who had depth and quirks and who were totally loveable, even when they were flawed.  It had a theme that resonated with me . . . that even when things are horrible and ugly and shameful and hard, there are still tiny moments of intense beauty, and you should not only acknowledge them, but create them.  It  had kindness and bravery and nobility in the middle of chaos.  It had a creative hook.  It had plenty of action.  It was, quite simply, breathtaking.  I highly recommend this for people who liked Hunger Games, and for people who like good books.  Also?  I hadn't realized that it was the first book in a planned trilogy, so now I'm even more excited.  The second book, Fuse, came out a few days ago and you can bet I'm in line to read it!
Posted by Cory at 9:22 AM No comments:

And the award goes to...

Well, the Oscars are still a week away and the media is awash with trophy predictions, red carpet fashions, and even tips and recipes to host your own Oscar party. I must confess that I do not really get all of the hoopla, but then I have never actually watched the Oscars start to finish. With the rest of the nation focused on the glitz and glam of Hollywood, I thought I would take a moment to write about the Oscar winner of Children's Literature this year.

Even if you are unfamiliar with the Newbery Medal, you have probably come across books with the bronze winner's medal or the silver honor medal on the front cover. The winning and honor books are chosen each year by a committee of children's librarians.Some past winners are Bridge to Terabithia, Sounder, The Tale of Despereaux. Some past honors books are Charlotte's Web, Hatchet, and My Side of the Mountain.  If you are interested in learning how the medal came to be, all the specifics concerning the selection process, and a list of former winners and runner ups you can follow this link:  Newbery Medal. 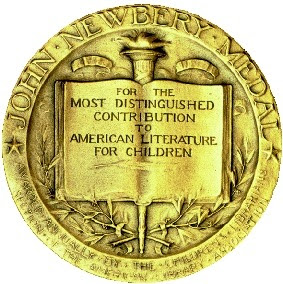 The 2013 winner and runner ups of the Newbery medal was announced in Seattle, Washington on January 28th and you can watch an encore of the webcast here: webcast. As a librarian, I love that I can watch the announcement of the winner live on the computer. This year it was particularly exciting to watch, because the book that won, The One and Only Ivan by Katherine Applegate, was my favorite book published in 2012. 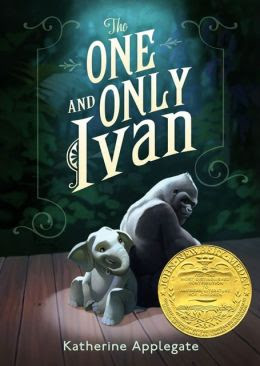 The One and Only Ivan is actually inspired by the true story of a silver back gorilla that spent nearly thirty years alone in a cage before public outcry got him moved to Zoo Atlanta. The real Ivan's story

The fictional Ivan has also spent years living in a glass cage at a decrepit tourist trap. Unlike the real Ivan, however, Applegate's fictional Ivan is not completely alone. Also living in the Exit 8 Big Top Mall and Video Arcade is Stella, an elephant long past her prime; and  Bob, a stray dog that loves to use Ivan's belly as a bed. In order to solicit more business the owner of the Big Top Mall purchases a baby elephant named Ruby. It is Ruby's innocence and youth that incite Stella and Ivan to pursue escape. When Stella dies it falls to Ivan to save Ruby from the dismal future that awaits her off Exit 8. It is through art that freedom is finally attained for both Ruby and Ivan. Julia, the young daughter of the mall custodian has frequently sneaked crayons and paper to Ivan, who finds solace in drawing the things in his limited world. When the public sees Ivan's art and learn of his mistreatment they demand his and Ruby's removal from the Big Top Mall. Just like the real Ivan, his fictional counterpart gets moved to a zoo with other gorillas and a natural habitat.

What makes Applegate's book so unique and brilliant is that the entire story is told in the sparse, beautiful, and completely believable voice of Ivan, the silverback gorilla. This is not your run of the mill talking animal story in which the characters think, talk, and act like people, though.

'hello
I am Ivan. I am a gorilla.
It is not as easy as it looks.

the reader is enthralled by the tragedy, love, wisdom, and grace that is distinctly Ivan. When I was reading The One and Only Ivan I never once questioned the authenticity of the narrator. The story is told by a gorilla with perceptions, feelings, and speech patterns that are completely inhuman and as a reader I was entranced by every word.

Now, I do recommend The One and Only Ivan for kids over the age of ten and possibly older if they are overly sensitive. I am an animal lover so I confess to crying while I read this book, but at least by the end they were happy tears.

Sadly, the real Ivan died in August, 2012 at the age of 50.  He never got to return to the jungles of Africa, but Ivan did get to live in an open habitat with other gorillas for the final 16 years of his life. Children (and adults) who loved reading Applegate's book can watch a video of the real Ivan on the Zoo Atlanta website: Ivan at Zoo Atlanta.

Posted by Anonymous at 9:23 PM No comments:

Welcome to the Portland District Library's blog, authored by your favorite public librarians!

Now why should you take the time to read a blog written by librarians. Well, if you found your way here I am supposing that you like to read. This blog will frequently post book reviews, recommendations,  and read-alike lists that will furnish you with some fresh titles and authors to check out.

In addition to an astounding selection of books, magazines, music, etc.; Portland District Library offers a variety of services and programs. By reading this blog you may learn about a computer class for seniors or a video game night for teens. The best part is that everything at the library is free and who doesn't do a little happy dance when they hear that word.

If you are a parent, grandparent, or caregiver let me take a moment to boast about the children's area at PDL. I may be biased, but we have a phenomenal space for kids of all ages to learn, explore, and use their imaginations. I will stop prattling before you leave the page, but I do look forward to posting information concerning children's book clubs, parties, and story times; as well as strategies and activities that promote literacy and encourage a lifelong love of reading.

Hopefully, reading this blog will change your perceptions of the public library for the better. The library is not a cavernous building reeking of must and mothballs where spinsters in buns and cat's eye glasses shush you for coughing. Portland District Library is, quite simply, a fun place to be and our goal is to see it grow as a vital part of the community.

Posted by Anonymous at 2:02 PM No comments: