So, every summer I lead a writing group for kids at the library. I usually do not make them do too much non-fiction writing because: 1. They do more non-fiction writing at school and 2. It is their least favorite genre to write (probably because that is what they mostly do at school). I did manage to get a few of them to write book reviews for the blog, though. As a parent and a librarian I am always interested to hear what kids think about the books that they read.


Zander (12)
I am Number Four by Pittacus Lore

Zane (9)
Three Ring Rascals #1: The Show Must Go On by Kate Klise

The Three-Ring Rascals is a series about the best circus in the world. In the first book the ring master gets too old and the circus needs a new one. They find a new ring master named Barnabas Brambles who ends up being very mean and tricking the old ring master to get money. You should read The Show Must Go On because it is a fun and silly story and then you will want to read the whole series.

Sailor Moon is a manga (Japanese graphic novel) by Naoko Takeuchi and was originally serialized between 1991 and 1997. It follows Usagi Tsuckino, who is told one day by a talking cat named Luna that she a guardian of love and justice, Sailor Moon. She must gather up her allies, the other Sailor Guardians (Mercury, Mars, Jupiter, and Venus), in order to defend the earth. Along the way they are joined by the mysterious Tuxedo Mask and together they work to learn about their past lives. The newest release of the series has 12 volumes of manga among which the 5 main story arcs are split between. During the time of its release Sailor Moon was ground breaking, as there were not many forms of manga focusing on a mostly female cast. It also offered girls a chance to imagine themselves as one  of the main characters as each is unique. Especially Usagi, who instead of being just a pretty face with no personality is ditzy and scared of fighting, but has a good heart that always shines through. While bits of it obviously pander to a younger female demographic, the strong female characters and good morals even out any artificiality that may be mixed in.  That being said, Sailor Moon remains one of my all time favorite series and I highly recommend it for preteen/teenage girls or anyone looking for a start into manga.

This book is spectacular! An easy two thumbs up. You may wonder: What is so great about Boy? Well, Boy is an autobiography (kind of) by Roald Dahl that talks about his most vivid memories from childhood. If you like Dahl's books and want to know his backstory this book is a great read!

Ellen (12)
Percy Jackson and the Olympians by Rick Riordan

Percy Jackson and the Olympians is a five part book series by Rick Riordan. it follows the half-blood, Percy Jackson, who along with his fellow half-bloods leads a battle against the Titan, Kronos. This series is filled with amazing character, plot twists, and settings. Plus, it is just neat to see what the Greek gods are up to in our world. I recommend this series to anyone who loves adventure and a good laugh now and then.

Blood of Olympus is the breathtaking conclusion to the Heroes of Olympus series with a fast pace that will keep readers ready for more. I think that Riordan has done his best work in this book.
Posted by Anonymous at 12:28 PM No comments: So, I recently returned to work after having my fourth child. Yes, there were tears. Probably more from me than my infant.

Since my older three children are fourteen, twelve, and nine we had sold or given away the majority of our baby stuff years ago.  Now, most new moms would be worried about having enough clothes, diapers, blankets, etc. in the house. Being a librarian, though, I was more concerned about the fact that I no longer had any baby board books.

Here is a list of ten board books that are perfect for building any new baby's library. I decided to include only one book by a single author otherwise there would be fifty books on this list instead of ten.

In the great green room. There was a telephone. And a red balloon.

Brown's gentle, lyrical text is instantly soothing. Little ones will love pointing out the different objects in Hurd's vibrant illustrations before saying goodnight to each one. Hopefully the book will also inspire them to say goodnight to the things in their own bedrooms before drifting off to sleep.

2. The Monster at the End of this Book by Jon Stone

How many times have I read this book?  A thousand? A million? Let's just say more times than I count and every time there was a toddler screaming "You turned the page!" right along with Grover. You do not have to be a Sesame Street fan to laugh at Grover's hilarious attempts to keep the reader from getting to the end of the book where a monster is waiting. Be sure to ham it up and pretend that it takes Herculean strength to turn the pages that Grover glues, nails, or bricks over.

Every child's library should include a healthy dose of Seuss. Hop on Pop is wonderful in board book format because, as the cover says, it is "The simplest Seuss for Youngest Use". It has the classic Dr. Seuss illustrations and rhyming nonsense, but it is not really a story. Rather Hop on Pop is more about concepts like on and off, up and down, in and out, etc.

The little boy, Jim, who is biting the tiger's tail always makes me giggle.  If you have a cat, though, you might want to protect it from the baby after reading this part. Of course, you may also have to protect dads from rambunctious toddlers trying to jump on their bellies after reading Hop on Pop.

I know. I highlight an Eric Carle book in nearly every post. What can I say, Carle's books are amazing! The stories are engaging, but simple enough for very young children. Also, the bright contrasting colors used in Carle's brilliant collage illustrations are perfect for a baby's developing vision. Here are renowned pediatrician, Dr. Sears', observations on infant vision development if you don't believe me.

The story of the little caterpillar who eats his way through a whole lot of food before turning into a butterfly is without a doubt Carle's most popular title. Little ones will not be able to resist poking their fingers through the holes where the hungry caterpillar tunnels through each meal. There are sure to be giggles when the little caterpillar turns into a big fat caterpillar and delighted gasps when he is revealed as a stunning butterfly with kaleidoscopic wings.
As children get older The Very Hungry Caterpillar is also a wonderful way to teach colors and practice counting.

In 2007 a stunning pop-up version of this classic book was released.  Little feet lift in and out of the squelchy mud; the snow swirls; the grass goes swishy swashy; and the bear even chases the family back home. Of course, you might want to stick with the board book until your child is old enough not to rip the pop-up parts.


6. Brown Bear, Brown Bear What do You See? by Bill Martin Jr.

What is the recipe for the perfect board book? An easy, repetitive text written by Bill Martin Jr. and gorgeous, animal illustrations by Eric Carle. Brown Bear, Brown Bear is really a brilliant little book about colors and animals that little ones will clamor for you to read again and again. 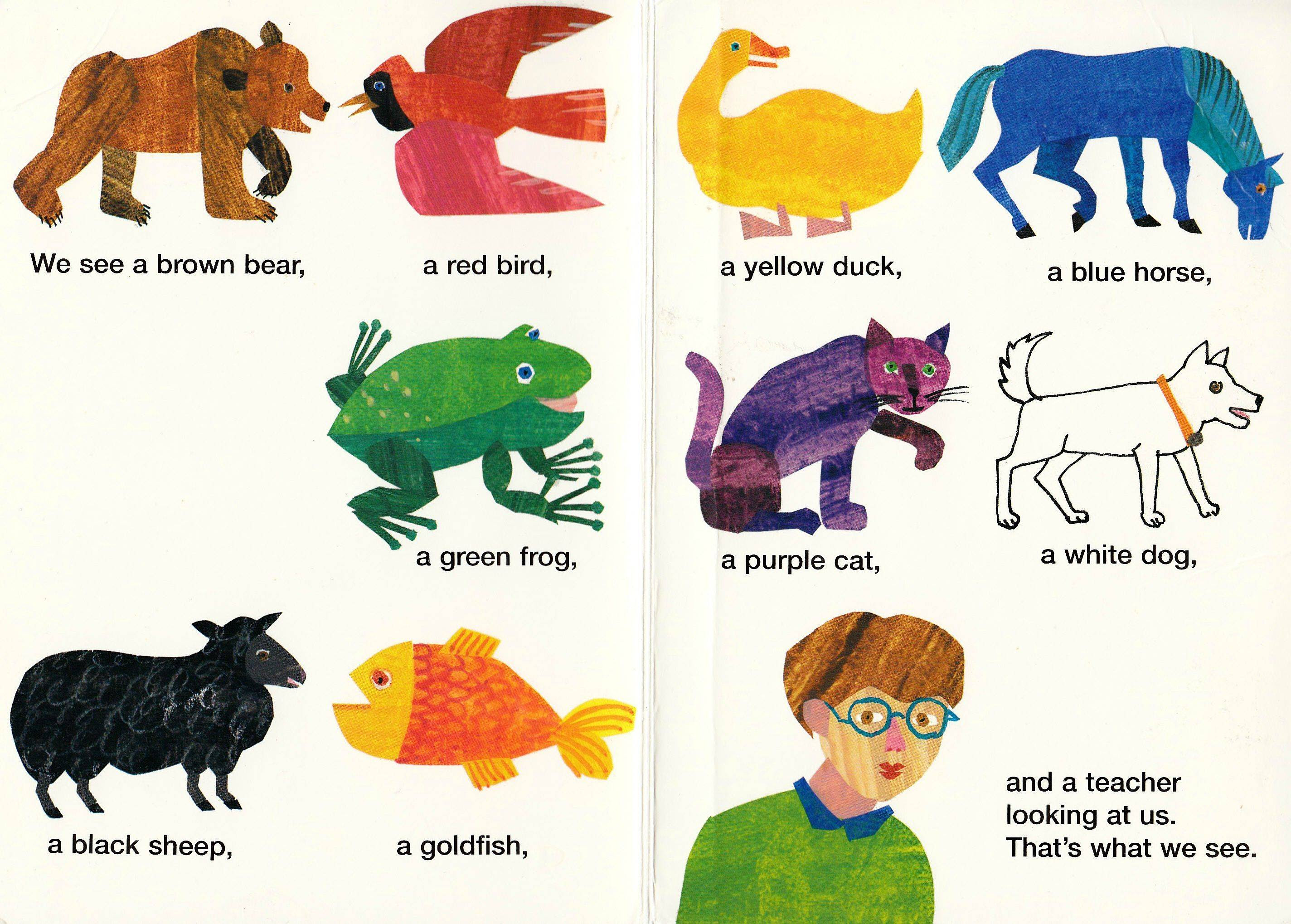 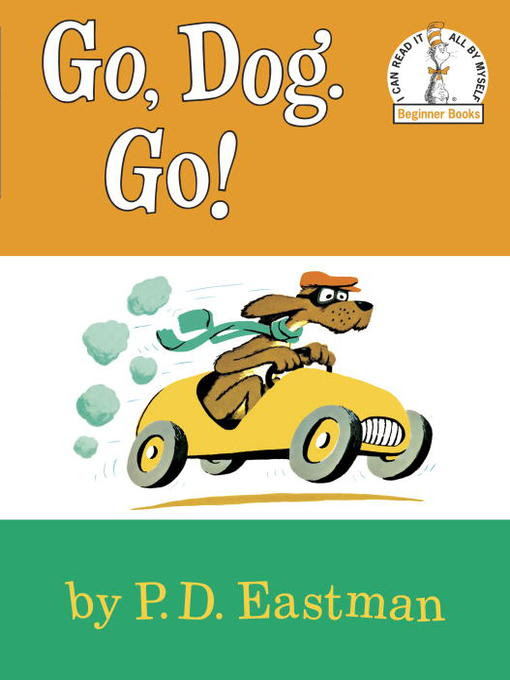 I usually recommend P.D. Eastman books for kids just learning how to read on their own, but Go, Dog. Go! is also a fantastic board book for babies. The text is very basic and introduces a number of concepts such as colors, counting, and opposites. Children will fall in love with all of the boldly colored dogs driving, swimming, playing, working, and sleeping. 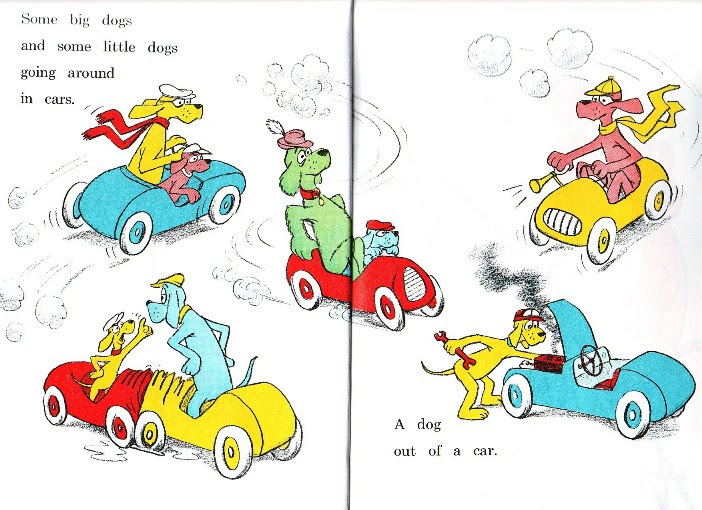 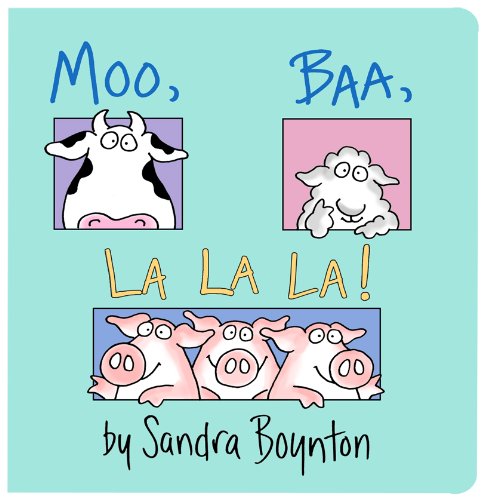 Sandra Boynton has written and illustrated oodles of board books that all feature whimsical text and characters of cheek-pinching cuteness.   Moo, Baa, La La La! is a sweet, rhyming story about animals and the sounds that they make. Of course, Boynton has to inject her own brand of silliness into it. Instead of saying "Oink" the pigs insist on singing "La La La!". The book ends with all of the animals being quiet and the question "What do you say?" If it is close to bedtime you can hope that your little one will say goodnight.
9. Tails by Matthew Van Fleet
This is the only touch-and-feel book on my list so, obviously, it must be the best one. Matthew Van Fleet has a whole fleet (pardon the pun) of touch-and-feel books for little readers but Tails has always been my favorite. The illustrations are too adorable for words and even adults will enjoy the multiple pop-ups, fold-outs, and textures. There is even a scratch-and-sniff skunk tail that you can smell at your own risk.

10. Little Blue Truck by Alice Schertle
Little Blue Truck was published in 2008 and is the most recently published board book on this list. I wish that it had been around when my other three children were babies and toddlers, because it is such a charming little book. Don't think that this story is only for boys because the main character is a truck. Little readers will be beeping, neighing, mooing, and oinking as Little Blue Truck drives around the countryside with his farm animal friends.